Your company is building a mobile app that targets Android and iOS devices.

Your team uses Azure DevOps to manage all work items and release cycles.

You need to recommend a solution to perform the following tasks:

Distribute beta releases to your testers.

Get user feedback on the functionality of new apps.

What should you include in the recommendation?

The WebApp1 installation is managed by using the Custom Script extension. The script resides in an Azure Storage account named sa1.

You plan to make a minor change to a UI element of WebApp1 and to gather user feedback about the change.

You need to implement limited user testing for the new version of WebApp1 on VMSS1.

Which three actions should you perform? Each correct answer presents part of the solution.

NOTE: Each correct selection is worth one point.

You need to create a notification if the peak average response time of an Azure web app named az400-9940427-main is more than five seconds when evaluated during a five-minute period. The notification must trigger the ''https://contoso.com/notify'' webhook.

To complete this task, sign in to the Microsoft Azure portal.

You create an alert rule in Azure Monitor as shown in the following exhibit. 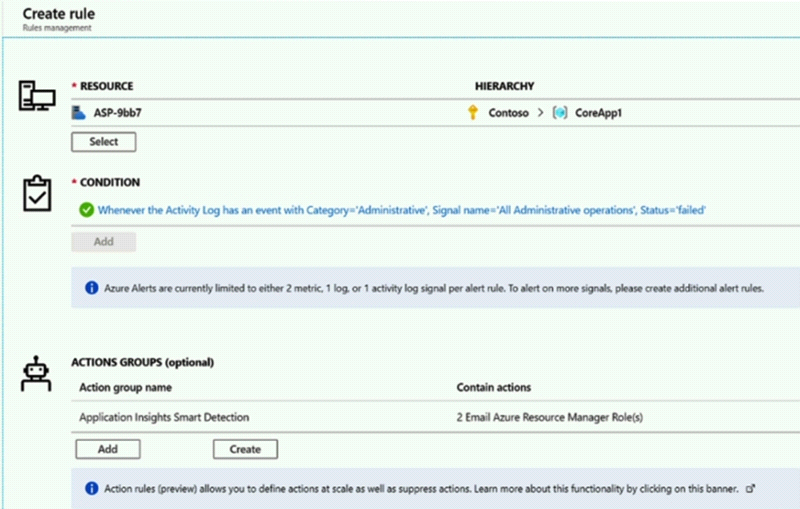 Which action will trigger an alert?

You have a web app hosted on Azure App Service. The web app stores data in an Azure SQL database.

You need to generate an alert when there are 10,000 simultaneous connections to the database. The solution must minimize development effort.

Which option should you select in the Diagnostics settings of the database?